The Annual Ward Day of Hosal Rosary ward was celebrated recently with offering high mass in the morning at the church of St.Peter, Barkur. The members of the ward participated actively in readings, offertory procession etc.,

The second part of the celebration was held in the evening around 5 pm at the premises of Mr.Maxim Sequeira’s house. It all started with the Rosary lead by the Ward’s Gurkarn Mrs.Jessy Pinto. After that, all the guests, invitees and the ward members were served by sweets and malt.
Mrs.Jessy Pinto escorted the guests to the well-decorated stage. Rev.Fr.Valerian Mendonca, Parish Priest of Barkur church was the president. Mrs.Eugine Quadrus, Vice-President and Mrs.Irene Pais, Secretary of the Parish Pastoral Council respectively were the Chief Guests. Sr.Valentine , In-charge of the Barkur  Boarding and Sr.Jane Paula, representative of the Barkur Convent  joined them on the dais. 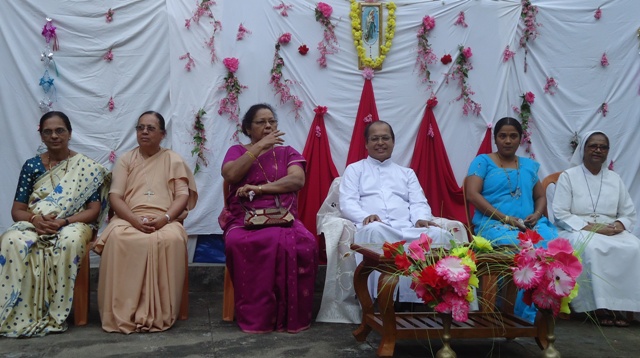 The stage program was started by the beautiful prayer song sung by the tiny tots Shyna Sequeira, Rohan Sequeira, Alvish Picardo and Remon Picardo,  followed by the welcome song sung by Jessy Pinto, Cicilia Picardo, Rosy D’Silva, Sabitha Picardo and Helen D’Souza.
As Ms.Metilda Joyce Sequeira ‘s handled the situation with her heartwarming welcome speech, the guests on the stage and the special invitees among the crowd were welcomed by the flowers given to them by the kids of the ward.
As part of the celebrations, 3 elderly persons were honored. Fr.Mendonca honored Mrs.Felciana Gonalves, Mr.Victor Gonsalves and Mr.Peter Picardo on behalf of the ward. 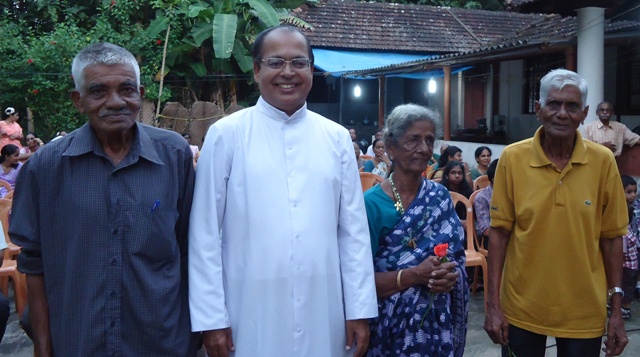 To add spirit to the ward-day celebration, various games were conducted on 30th September for the ward members. As Mrs.Rosy D’Silva read out the winners’ list, Fr.Mendonca distributed prizes to them. He also honored talented youths of the ward Mr.Varsha Lobo, an upcoming athlete, Ms.Heera Lobo, an academic talent and Ms.Reema D’Souza, a Catechism Award winner. Fr.Mendonca also honored the patrons from the Ward who helped monetarily to conduct the Ward Day. Mrs.Reshma Sequeira read out the Patrons’ list.
Mrs.Eugine Quadrus, one of the Chief Guests,  in her speech, praised the unity of the ward and wished all the good luck to the ward members.
Mr.Dolphy D’Lima, Gurkar of Hosal St.Lawrence Ward spoke on behalf of the audience. He said that this celebration should be the inspiration to other wards also.
“During her 5 months’ leadership as Gurkarn, Mrs.Jessy Pinto has brought the whole ward as one family” said Fr.Mendonca in his presidential speech. As there are more women than men in this ward, it is certainly a “Women’s world” he said. As a token of appreciation he handed a beautiful bouquet to her and wished the very best to her and to the whole ward. 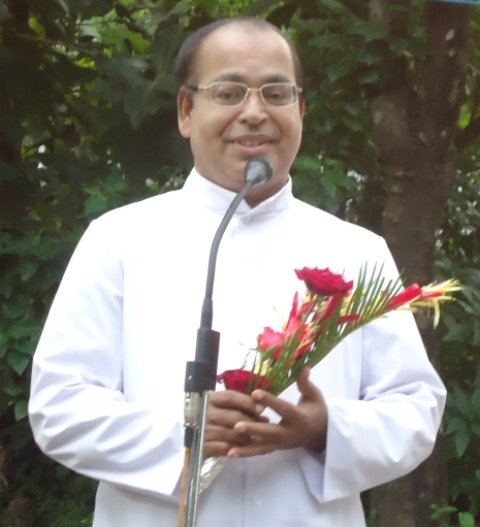 As the stage program ended with this, the guests were requested to vacate the dais and to accommodate  front rows reserved for them among the audience.
The entertainment session started  with the small kids dancing to the tunes of beautiful rhymes like ‘Mary had a little lamb..’,  ‘London bridge is falling down…’, ‘Ba Ba Black Sheep…’ etc.,
The farce “Peddana Jaana Hendathi” (Brave wife of a fool) made the audience burst into laughter. The farce was in Kundagannada. Ms.Sabitha Picardo as the Fool, Ms.Anitha Sequeira as the Brave wife and Ms.Gretta Fernandes as the Meshtru (Teacher) acted like the professionals. Ms.Helen D’Souza, Mr.Anish Picardo and a group of children well supported them this farce.
Film Dance of Master Dion Gonsalves and Master Flavon Picardo was the other item, that was well appreciated by the audience.
The dance “Kolaata” or “Thoniyaa Naach” lead by eight of the ward ladies lead by Ms.Reshma Sequeira and Ms.Gretta Fernandes was the awesome one. The ladies set ablaze the surrounding by their lively dance to the beautiful tune of a Tamil song. 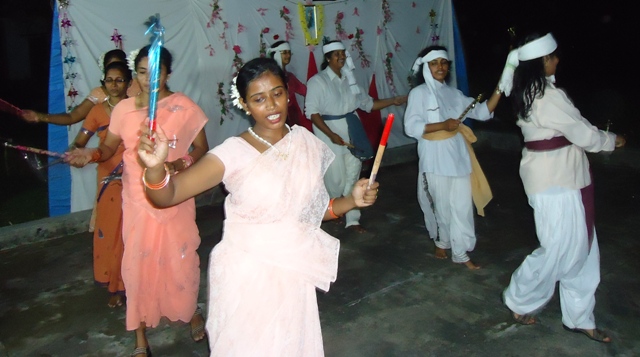 As the ward is dedicated to our lady of Rosary and the day was her feast day, the last song was based Marian Theme. A beautiful song “Namaan Mariye” was enacted with action and dance by the children of the Ward. Ms.Reema D’Souza as Mother Mary and Branette Fernandes as Angel Gabriel were a delight to be watched.
Mrs.Jessy Pinto proposed the vote of thanks. The program was concluded by the Aamori (Angelus).
Fr.Mendonca blessed the food, which was prepared by the members of the Ward. The food was served with river fish curry and Chicken Sukka. The Vorn made by the new rice (Navo Thaandul) was the added flavor to the food.
At the end, to praise and thank the Lord for the all favors received through our lady of Rosary, “Laavdaathe Dominom…..” was sung by all.
At the end, as the Konknni  baila songs were played, the ward members and the invitees danced  together with joy and happiness.
Ms.Sabitha Picardo conducted the whole program with grace.