Rightly a dream come true situation for the widow Mrs Dorothy DAlmeida and her family, once Mr Charles DAlmeida, President of Catholic Sabha, Barkur Unit, intimated her, that her concern and request will see the light soon. It all happened like a fairy tale – the application was tabled before the just promoted CYM Barkur Charity Group and the Core Committee took a unanimous decision to take this well deserved case on priority.

CYM Barkur is a banner always flying high in and around Barkur since 1976. In these past 45 odd years, lot of better things happened through this platform. Many offshoots were flourished and earned a place of goodwill and reputation in Mumbai, Bangalore, in Arabian Gulf countries. The latest addition to this elite list is – Ex CYM Barkur Charity Fund, envisaged by a visionary Vincent DAlmeida and few of his associates and likeminded companions in November, 2020.

Unlike various previous platforms floated earlier, this will have unique objectives to come to the rescue of the poorest of the poor, the neediest whatever way possible.

Every new set up need time to establish but CYMBCG, didn’t wait for gestation period, instead took it on its shoulders to repair and renovate the almost dilapidated house, belonging to Mrs Dorothy DAlmeida, Halekody spending almost 1.80 lakhs, exclusively contributed by its members and kind hearted generous people, approached through Barkuronline Website…..

Blessing of the Repaired House on 26th February, 2021:

Now the house ready for occupation and the family has no words to express their gratitude’s. The parish Priest of St. Pete Church Barkur, Rev. Fr. Philip Neri Aranha, invoked Almighty Lords blessings on this home and in his message, lauded the real yeoman work, “its like the real Holy Mass to wipe the tears of the most deserved family in my parish” he told and thanked the ICYM Ex- Members Charity Fund Members, the Catholic Sabha, Barkur unit, and people who worked hard to execute it in a professional manner led by Divyanand Gonsalves.

During a short thanks giving programme, one of the Members of this 16 Member Group, Mr Archibald Furtado, introduced and explained the time line, thus far, and in short the broad objectives of this organisation. 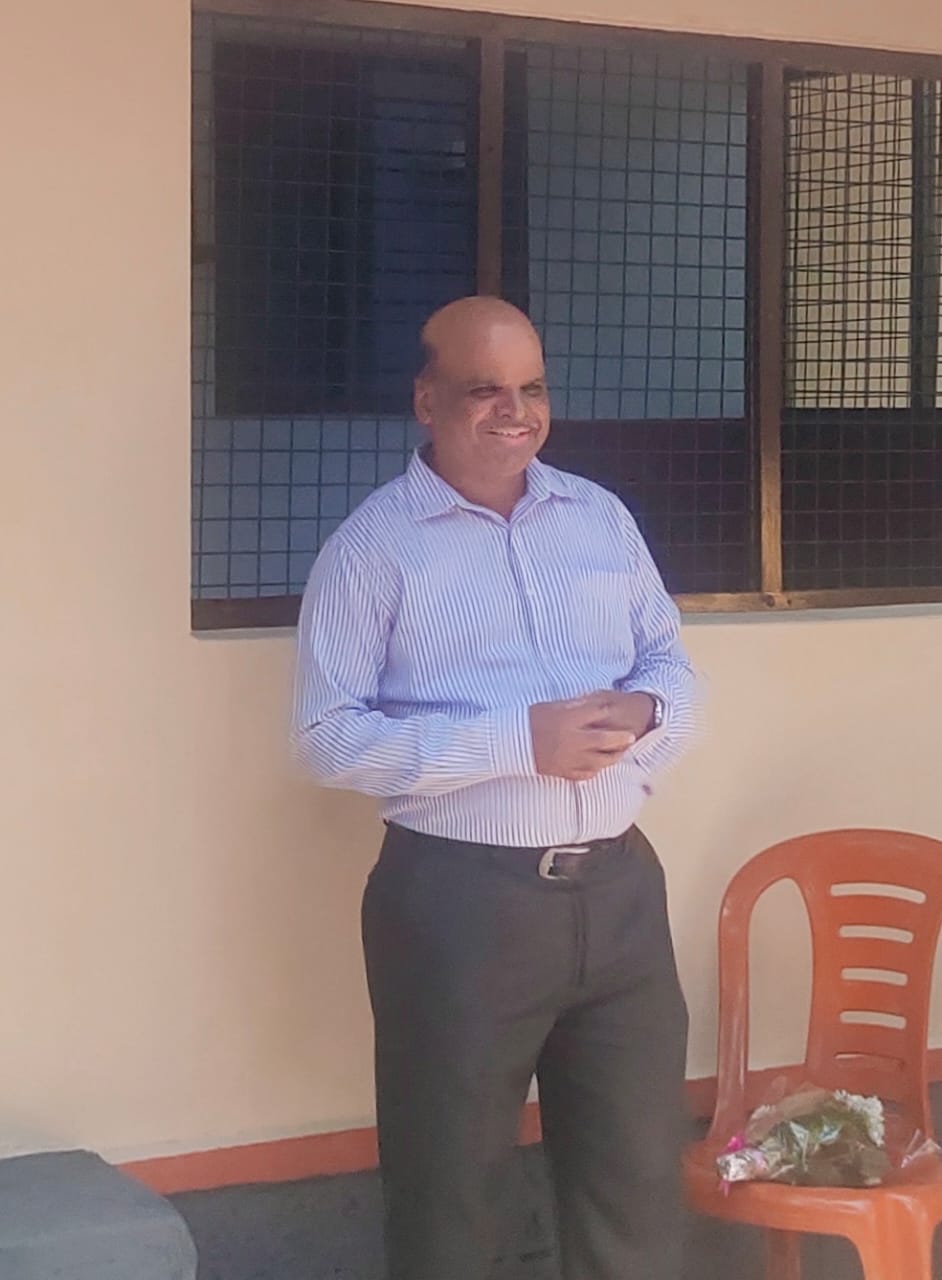 Mr. Charles DAlmeida, the President of Catholic Sabha, Barkur Church, extended a warm welcome to all gathered dignitaries, friends and well-wishers and specially offered Bouquet to Parish Priest as a token of respect and his gracious presence on this unique occasion.

Mr Kishore Gonsalves, a proud Barkurian, and Member of Ex Members of ICYM Ex Members Trust, (the Franchisee owner of Daiji word Udupi, President Kavita Trust) outlined how CYM spirit encouraged to envisage this concept of reaching to the poorest and the needy and informed the gathering that today, all the 16 Members, other well wishers and donors feel contented to see its first ever project completed and handed over to the most deserved recipients today. 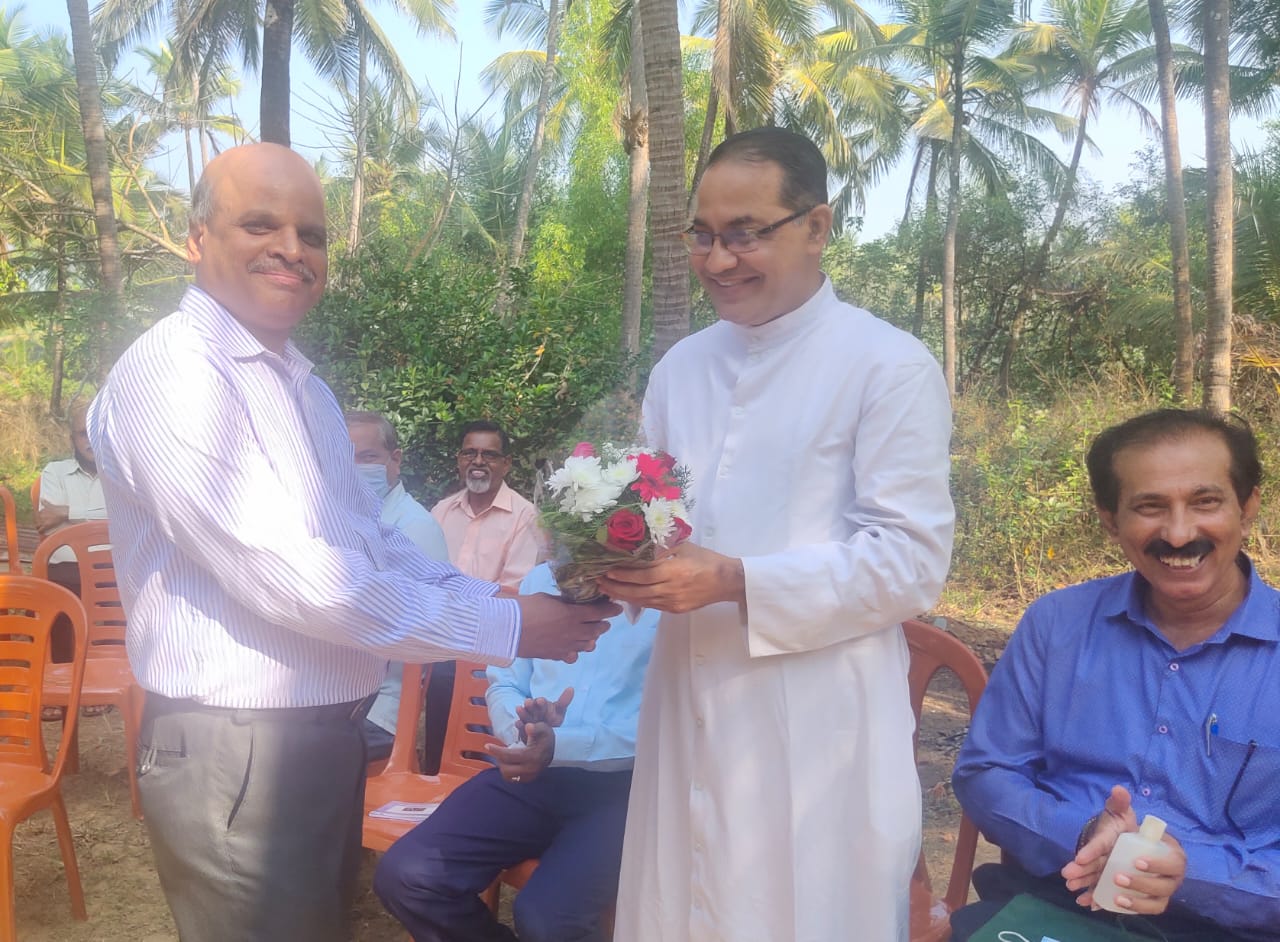 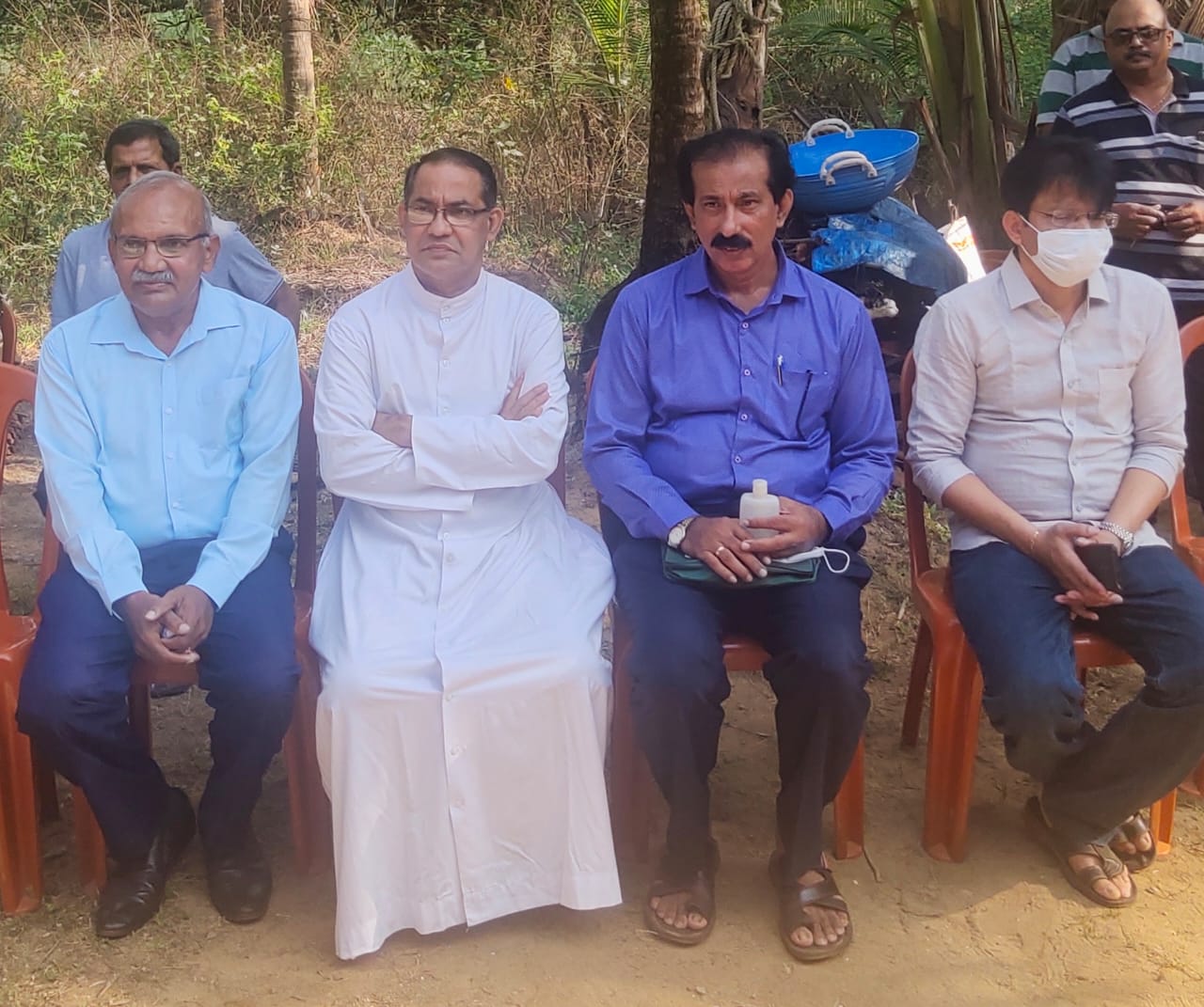 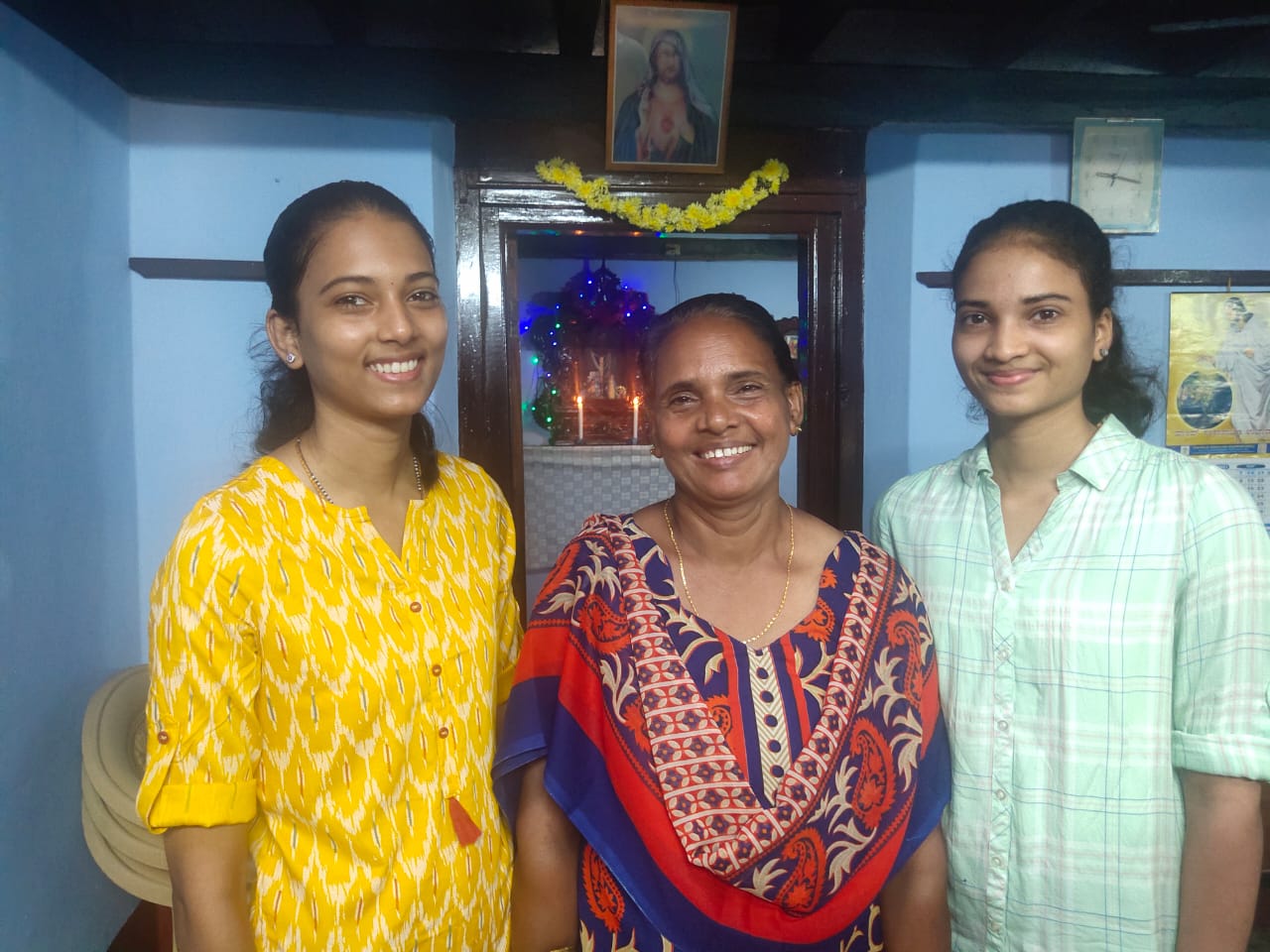 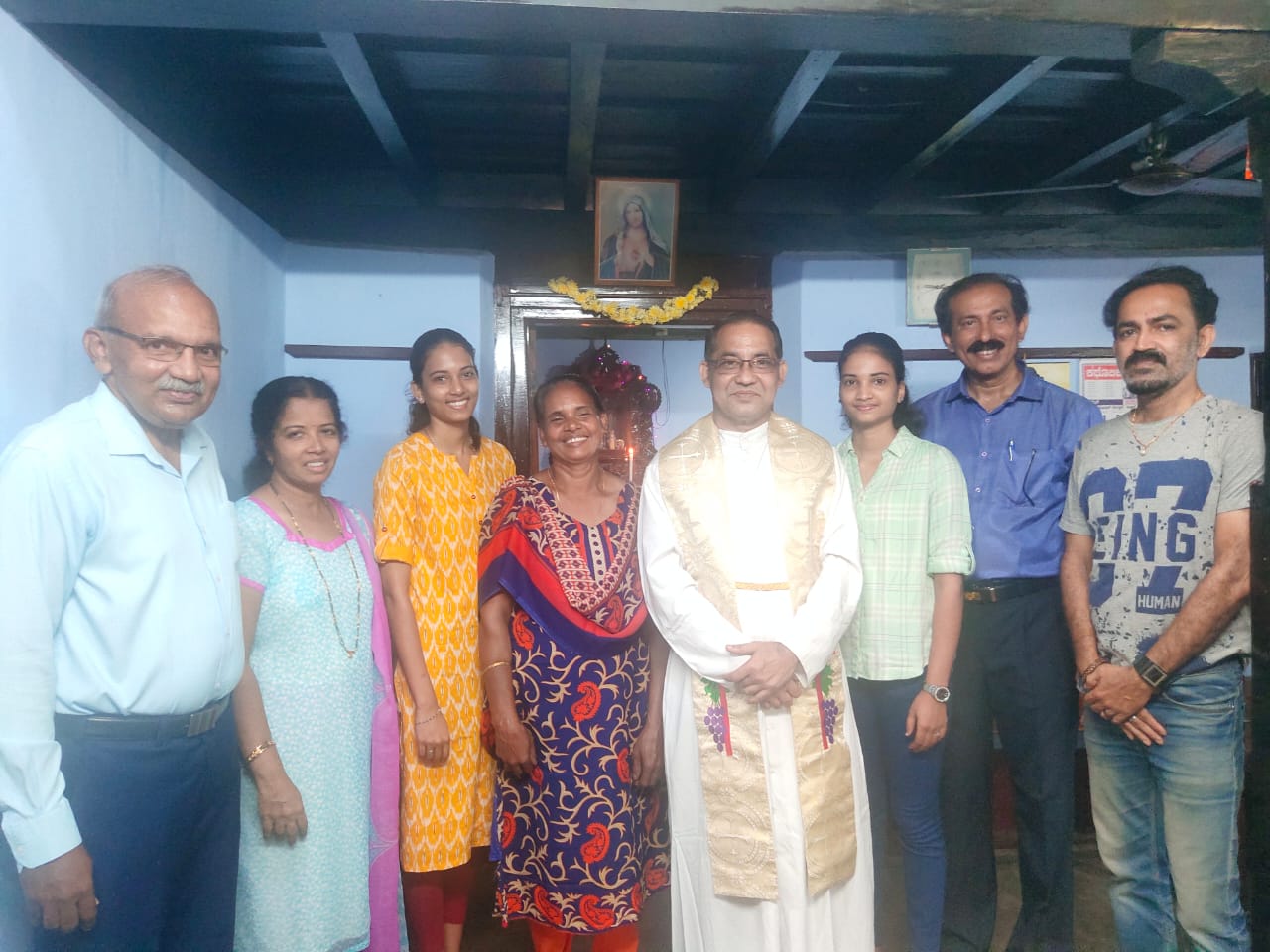 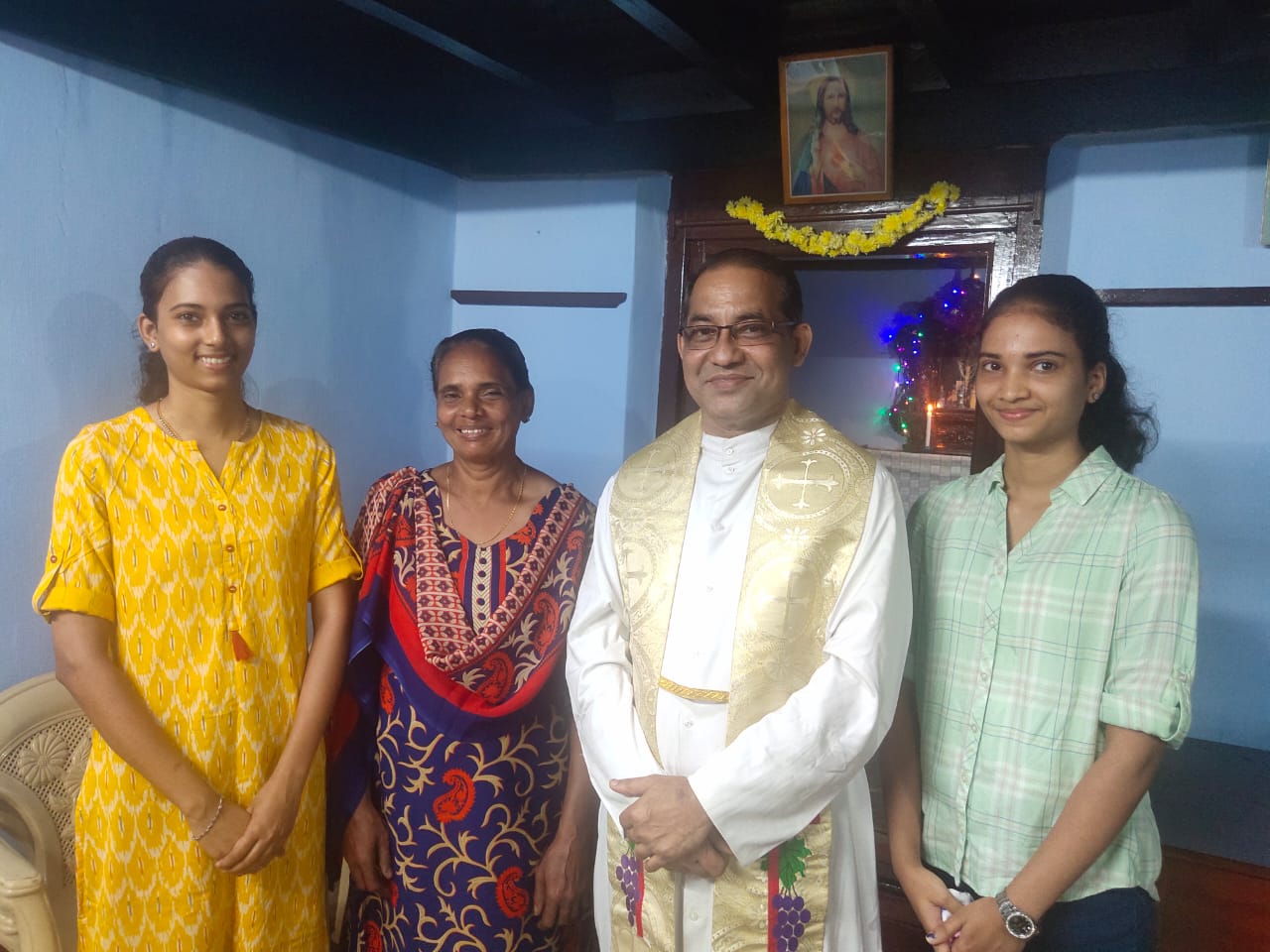 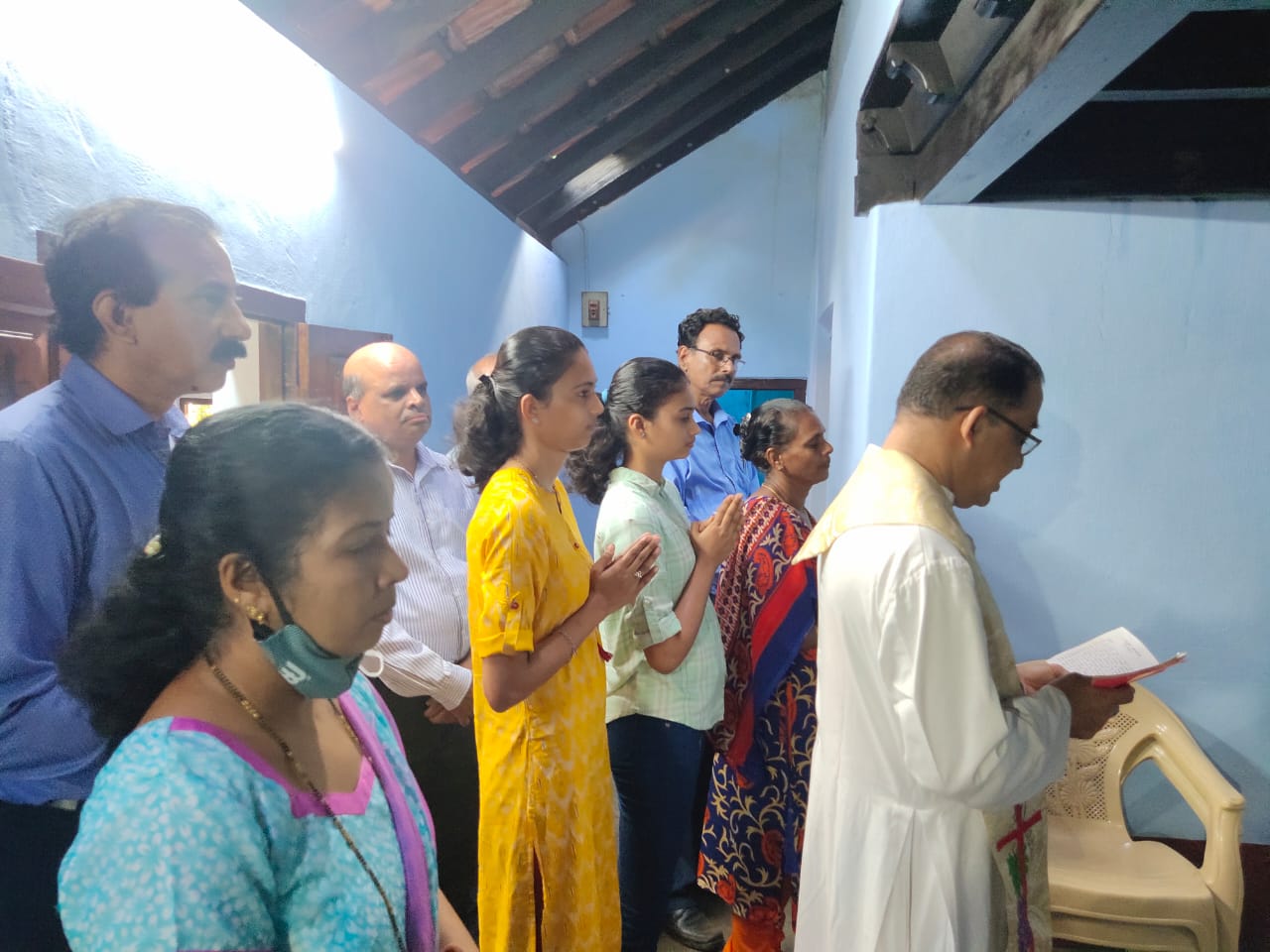 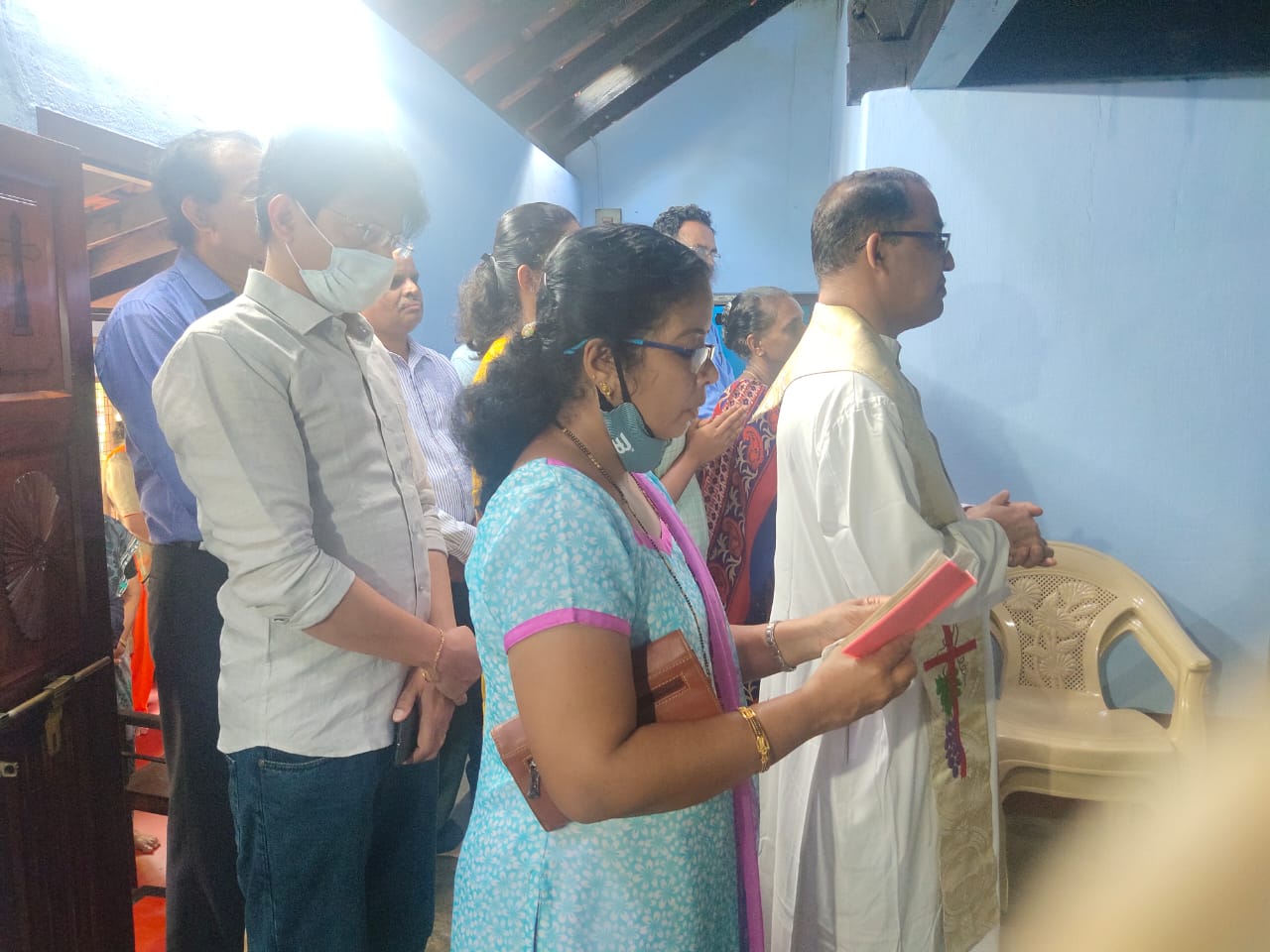 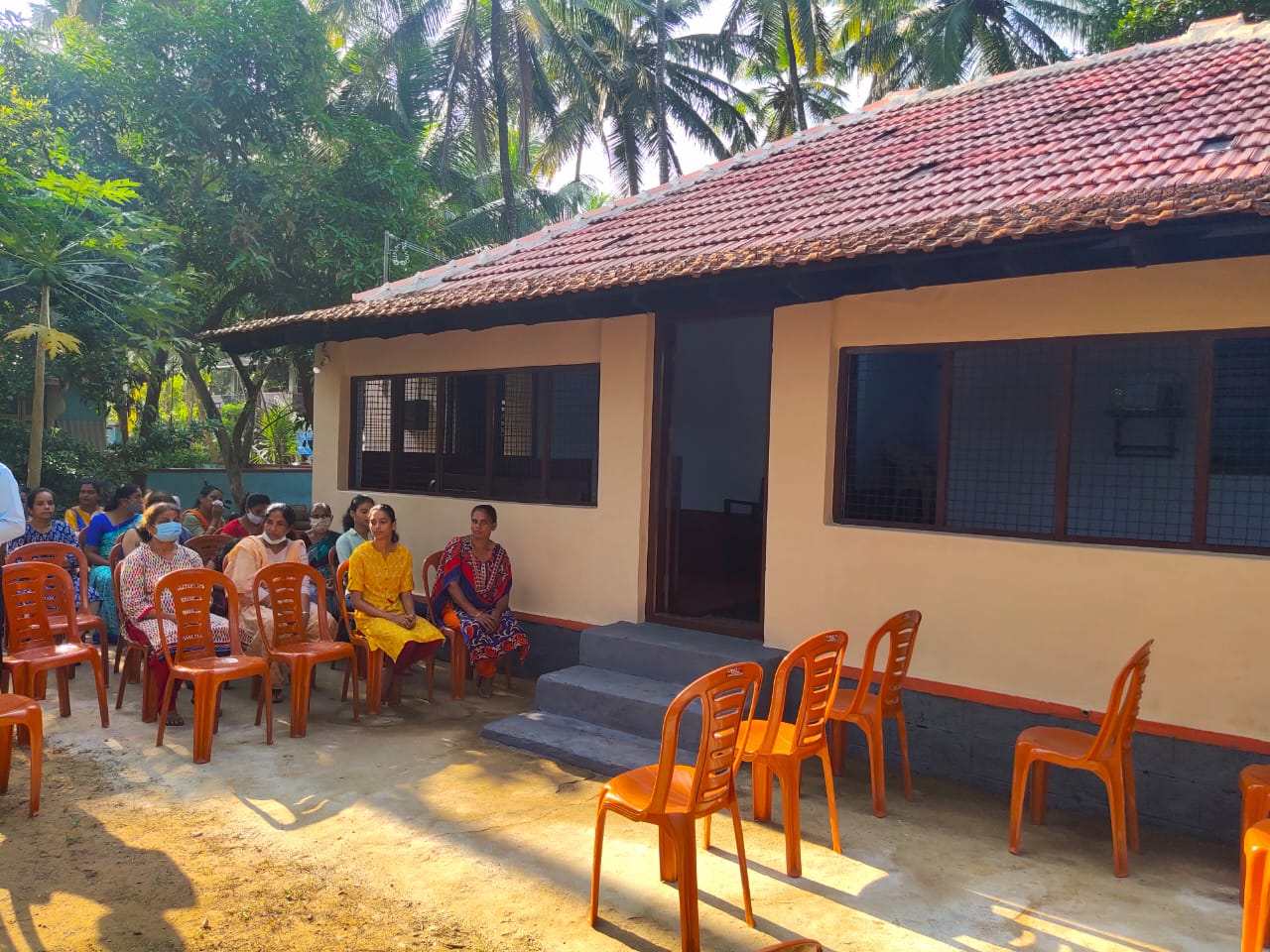 The great Trios, Mr. Divyanand Gonsalves, who was entrusted with responsibilities of Project Co Coordinator, Mr Charles DAlmeida, the President of Catholic Sabha, Barkur and Mr. Jossie Fernandes, a well known social worker (Presently the Gurkar of Nagermutt ward, Barkur) were felicitated with traditional shawl and bouquet of colourful flowers to acknowledge their selfless service in handling the project much before targeted time. 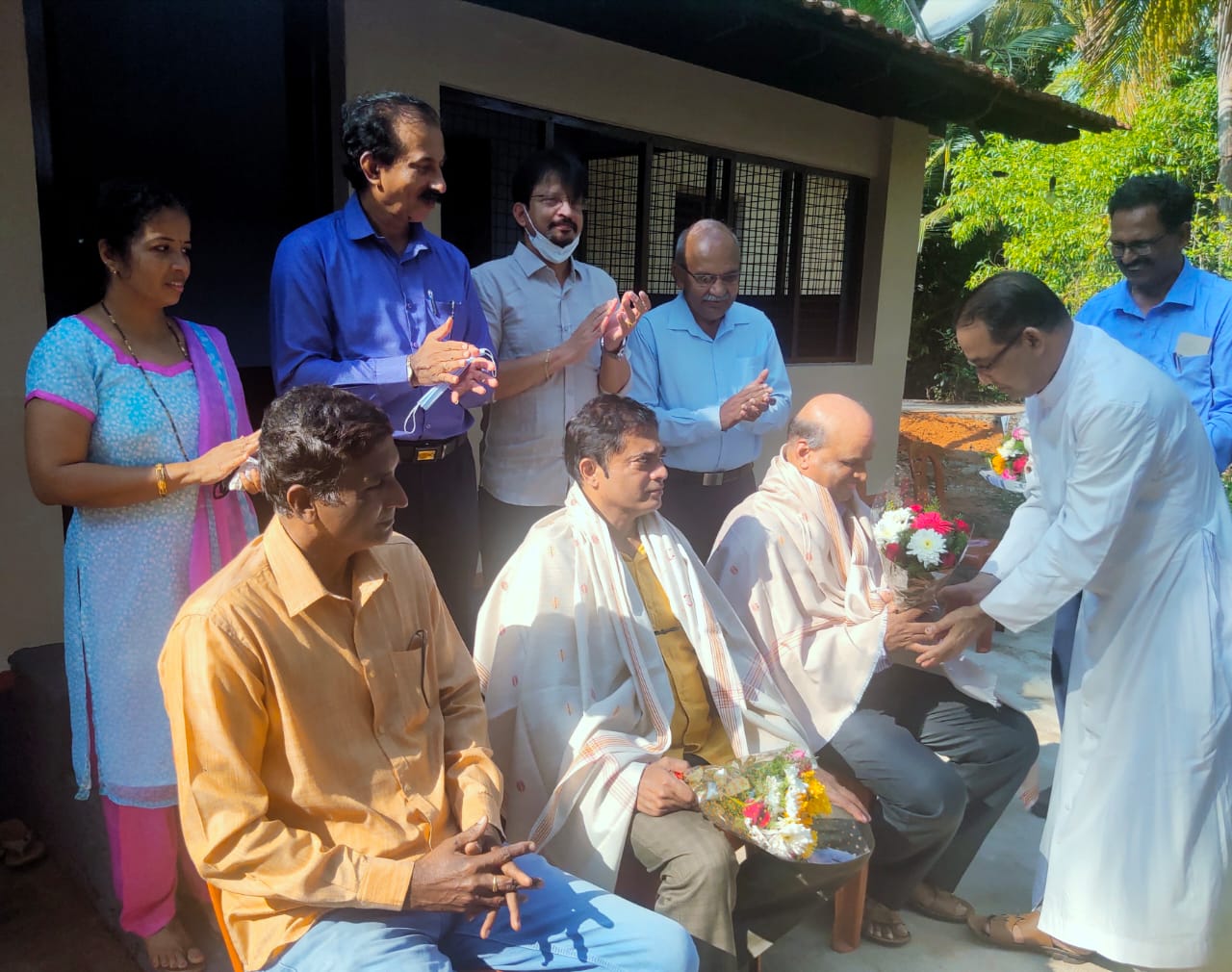 It’s worth a note that, even during testing time of Covid 19 pandemic, the ward members especially youth, voluntarily came forward to sacrifice their labour and time were recognised and honoured by the parish Priest, Fr. PN Aranha and expected others to imitate them. Meanwhile, Mr. Archibald Furtado declared the big chunk of financial help channelized by the ward members settled and working abroad and Mumbai. He also read out the List of Donors exclusively for this maiden project and expressed heartfelt thanks to all of them.

Ms Rolita DAlmeida, eldest daughter of Mrs Dorothy DAlmeida, in her emotionally packed brief vote of thanks, called out each and everybody’s contribution, sacrifices and goodwill towards her family and admitted that their family will remain always indebted to all concerned for life time, of course just a thank you is small word, but assured to keep all generous CYM Charity Fund members and others in their families in their daily prayers.

To conclude the small but meaningful event, the organisers arranged refreshments for all who gathered, including the Sisters of IHM Convent, office bearers of Pastoral Council, Members of CS, the Ex members CYM Barkur, various representatives of  other pious organisations of the church, the ward members, neighbours and well wishers.

On behalf of Team Barkur-online.